Isn’t the word “feminism” itself gender-biased?

Google’s new application called Ngram Viewer lets you see how frequently any terms or phrases appeared in books over time. The data is based on the millions of books Google digitized. As you can see below, the occurrence of the word “feminism” peaked in 1996 and has been in decline since. But, in the same period of time (from 1980 to 2008), the occurrence of the phrase “gender equality” has steadily grown. 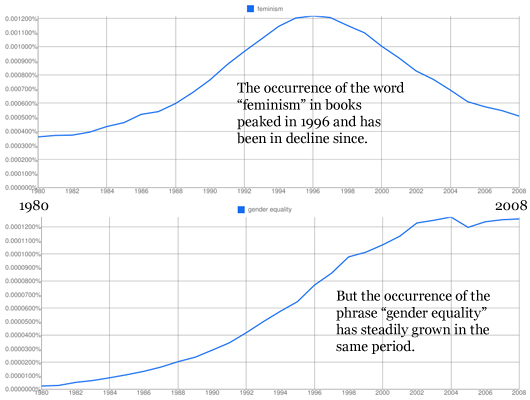 This makes intuitive sense to me. Now that the economy assumes each household to have two people earning income, in order to sustain a decent lifestyle, men need and want their wives to work. It is no longer a matter of choice. In other words, “gender equality” is just as important for men as it is for women. However, men are much less likely to identify themselves as “feminists” because the word itself implies gender bias; i.e., someone who advocates for the interests of women. The men who are interested in gender equality would not want to advocate for women or for men. The point is to eliminate gender bias as much as possible. In that sense, the word “feminism” or “feminist” does not make sense; it feels awkward and inappropriate. I believe the first graph above reflects that.

Language has subtle yet powerful ways of influencing our values and behavior. This is why certain words have been deemed politically incorrect and have been replaced by new words, like “black” to “African American”. I feel that it’s time for us to retire the word “feminism” as it does not make sense for the ideal of gender equality itself to have gender bias. What do you think?

Isn’t the word ‘feminism’ itself gender-biased? If it isn’t, then neither is ‘masculinism’. That’s why I say ‘gender equality’ instead, though I wish there were a single word to denote ‘gender equality’.

I disagree with the ‘black’-to-‘African-American’ usage, though. African-Americans (descendants of the transatlantic slaves) are black; but black Americans aren't necessarily African-American. For instance, Barack Obama is a black (half to be specific) American but not African-American since he isn't descended from the United States' slaves.

I think dyske is correct. We should also change "support gay rights" to "support preference equality". And we should not support any kind of "immigrant's rights," we should instead fight for a "borderless world."

...I always saw the upgrade as from "african-american" to "black." I'm still referred to as "white."

FWIW, I think the falloff in the use of the word feminism is more due to its negative connotations. I know many women who believe in equality but eschew the title of feminist. And I have personally be told by a self-proclaimed feminist that it was time for payback against men ... So feminists, in my view, aren't for equality but for superiority. I am not alone in that thought and that is likely, at least in part, for the falloff of use.

How a black who emigrates to England? Do we call him "African-English"? It gets confusing for sport-announcers when covering an int'l event ...

The vast majority of African-Americans I know concur, likewise acknowledging that Barack, for instance, is, by descent, an African American (unhyphenated) but not African-American (hyphenated), as he isn’t descended from the United States’ slave population.

The distinction between the terms isn’t useless, either. Anthropologically, not only do the African-American population share a collective history, struggles and often identity but also are ethnically distinct from African Americans.

Is feminine logic really an oxymoron?

I agree with this, and I also wish there was a single word for 'gender equality', and an equivalent of 'feminist' at that.

As for African-Americans, I generally think it's apt and not necessarily implying a descendent from slaves, although I have some concern for Jamaicans always being included in there, as they're black but certainly not African.

It's funny how a white person is racist if they call a black person "a" black, but no one even bats an eye when black people refer to whites as "whites." I would say the same about words that are perceived as gender specific. When I say "mail carrier" in place of postman, I feel like I am also saying, "I understand that there may be women that are offended by my use of the word "man" when referring to them, so I will use this gender ambiguous term instead."
Maybe we should just stop being emotional about it and focus on actual injustice instead of trying to turn ignorance into injustice.

@Rachel
Actually, most black Jamaicans and other islanders trace their roots back to Africa. Dark skinned Arabs or South Americans, however, usually do not.

However, since one can’t always know every black person’s heritage, be it African-American, Caribbean, African, South American, Malagasy or what not, it’s better to just use the all-encompassing term ‘black’ instead of trying to be ‘politically correct’ (ugh) and assigning the person in question a wrong ethnicity, such as ‘African-American’ when, in fact, they may well be from Barbados.

"... ‘African-American’ (hyphenated), which may also be written ‘Afro-American’... it’s better to just use the all-encompassing term ‘black’ instead of trying to be ‘politically correct’..."

Actually, it's my recollection that while African-American may mean the same thing as Afro-American, the term African-American was created specifically to replace Afro-American, the latter of which is considered politcially incorrect, and perhaps mildly offensive by some. Similarly and earlier, Afro-American was created to replace "black" which is also considered by some to be politically incorrect and possibly offensive (although I do frequently hear "black" from both African-Americans and non-African-Americans alike). You can certainly refer to anyone you like any way you like, but do realize that you may be perceived by some as insensitive or even bigoted. On the other hand, others may praise you for not giving into pressure to embrace politically correct flavors of the day. At the very least, it might be wise to know your audience before you speak. As the saying goes, "you pays your money and your takes your choice".

PS - while I would certainly accept that some have used African-American to mean 'descended from "black" slaves in the United States', it would be counterfactual to suggest that this is the sole or even the more common (or even a remotely common) definition. By far, common usage and every formal definition I have checked, is simply "American of African descent" with an occasional addendum of "especially of black African descent". Further, I have often seen the idea that African-American might refer to "descended from black slaves..." portrayed as itself a form of naive and provincial bigotry stemming from a stereotypical and false notion that all "blacks" in the US are descended from slaves, ignoring the rich and varied cultures and origins of African-Americans here (in all fairness, I must point out that the majority of African-Americans are descended from slaves, but that's still irrelevant).

‘‘Further, I have often seen the idea that African-American might refer to "descended from black slaves..." portrayed as itself a form of naive and provincial bigotry stemming from a stereotypical and false notion that all "blacks" in the US are descended from slaves, ignoring the rich and varied cultures and origins of African-Americans here’’

‘‘By far, common usage and every formal definition I have checked, is simply "American of African descent" with an occasional addendum of "especially of black African descent"’’

That is why egalitarian is a much widely accepted term. ;)))))